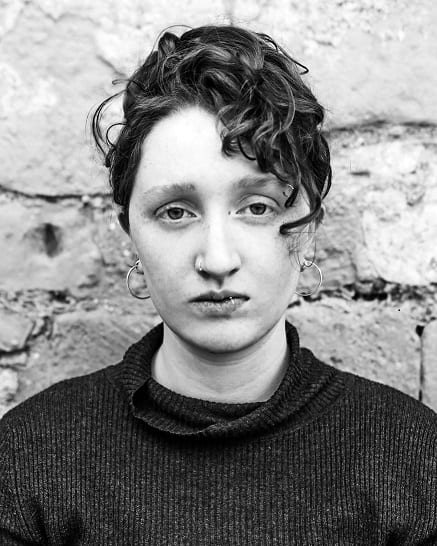 Laura Grace Simpkins (24) writes creative non-fiction about her mental and physical health. In this personal essay, ‘Eyelids’, she shares her ongoing experience with eczema.

‘Thanks’, I’d reply, ‘it’s eczema’. That’s how it would start anyway—a light blush across both eyelids, as if I were following some kind of zeitgeisty cosmetic trend. Then the skin there would fissure from dryness and scale-up, before flaking off like blossom petals shedding at the end of spring. After that, my eyelids would turn really red, puffy and sore.

If left untreated, they were liable to get infected. When they did—inevitably—the skin there would ooze pus the shade and stickiness of tree sap. Then, it would begin to bleed.

Eczema came on quickly, suddenly, almost overnight. I’d never had it as a child and it wasn’t in my family. I suffered neither from asthma nor hay-fever—conditions that were frequently coexistent. It was my third and last year of university and I didn’t really know what to do. Of course, I had tried to go down the natural route first—all coconut oil and snail cream—which didn’t do a thing. Out of desperation, I bought all available over-the-counter skin-care products, by brands like Nivea and E45.

If anything, my eczema just got worse. At the doctor’s, I was prescribed countless medications and medicated creams, including a 30g tube of Hydrocortisone 1%, a pump full of the emollient moisturiser Cetraben to ‘soothe, soften and protect the skin’ and another of Dermol 500, an antimicrobial lotion to help reduce the secondary bacterial infection. When the infection worsened, a GP gave me antibiotics—Erythromycin four times a day for six months—and only then was I referred to the dermatology department at the university hospital and was put on the waiting list. The doctors were as stupefied by it as I was, if not more so.

If I wasn’t squeezing tears out of my eyes, I was secreting gunk out of my eyelids. In the lead up to finals, the skin there almost disintegrated from self-digestion. I had to walk into the examination schools looking like a tree invaded by saprophytic fungus, that which thrives rhizomatically on decaying organic matter. I certainly felt like dead meat. I remember that I took my papers in the heat of summer, sitting down in subfusc and the gown, which I quickly took off. I was uncomfortable and agitated, even through the drugged-up haze of the anti-anxiety medication lorazepam, which I’d taken that morning. I’d been prescribed it in the event of an eczema-related panic attack.

My skin was so itchy that I was unable to concentrate; I couldn’t even hold a pen let alone attempt to articulate ambitious answers to all the questions. I remember shutting my eyes, just for a moment, longing for respite.

Open or closed, my eyelids had an unrelenting aura of raw hypersensitivity. One time, after my exams, I had to go food shopping wearing a hat and a pair of sunglasses, in order to hide the fact that I had stuck bits of toilet roll all over my treacly eyelids. They glued to my skin without needing further adhesive.

When I finally got to the hospital, the consultant was outraged by the condition I’d been left in. She asked what I’d been given by the doctors.

‘Hydrocortisone. All the creams. Oral antibiotics, too: Erythromycin’.

The consultant recommended two types of topical corticosteroid ointments (Elocon 0.1% to be used sparingly for the first seven days of treatment and, after that, Eumovate 0.05%, a steroid of a moderate strength). I was to take an antihistamine a day—loratadine, indefinitely, to be rotated every few months—as well as remain on the antibiotics until the infection cleared up. The consultant advised an allergy test, with a disclaimer that the wait would be about four months long. It would actually be over a year before an appointment became available.

I was encouraged to change over all of my toiletries and cleaning products; replace my shower gel with a non-foaming, non-drying, no-soap variety and my washing detergent with a non-fragranced, non-bio, no-fun alternative. Exiled was every ethereal, airy scent—jasmine and ylang-ylang and eucalyptus—supplanted by those of paraffin and beeswax. I left the hospital, scripts clutched in hand, for the pharmacy.

My parents had been concerned at why I was spending so much money on prescriptions and why, moreover, nothing had been successful. I had to ask them whether they could assist with the escalating costs. They didn’t realise how bad it had got, until I visited home one weekend, in desperate need of a break from being such an eyesore. ‘I was shocked, to be honest’, mum informed me a time later. ‘Shocked at the sight of your face’.

I had racked up a large bill on all sorts of paraphernalia that made no difference when I was (almost reluctantly) told about the monthly direct debit pre-payment certificate. Why had no one at the pharmacy told me about it earlier? I wondered. Did you have to spend a certain amount of money with the NHS before you were over the minimum threshold and invited into this secret money-saving society? The pharmacist begrudgingly shuffled through some papers in order to find me the website address and went off to sort my request.

When I got to my room, I squeezed a blob of the Elocon onto my right index finger and lightly smeared my eyelids with a gentle veneer. Almost immediately, my eyes watered; it stung, slightly, in the most satisfactory way. I was hugely relieved, although, out of sheer exhaustion, intrusive thoughts began popping in my head. What if this steroid was, inexplicably, too strong, and would somehow eat its way through the thin palpebral skin there—what if soon I’d be entirely lidless? I tried not to get hysterical. My fears proved to be unfounded: the infection cleared up and within a week I downgraded to the Eumovate.

My eczema worsened, got better, worsened, got better. The steroids were effective yet induced acne. A year later, I had my patch-tests; I wasn’t allergic to or irritated by anything. That eczema doesn’t have to be triggered externally (by an allergy or an irritant) but could be internally (by the mind) had been woefully overlooked in my case. That eczema might have a causal connection with bipolar disorder, which I’d been diagnosed with the term before my finals, went unsaid. I started to read online about psychodermatology, the relatively new discipline researching the interaction between the mind and the skin. One study has demonstrated that individuals with bipolar are up to four times more likely as those without it to be afflicted by various skin problems, including eczema.

I have what is called a psychophysiological disorder; my eczema is precipitated by psychological stress.

Stress releases the hormone cortisol, kicking the immune system into overdrive and increasing the allergic inflammatory response, which can cause the body to fight itself. During that last term at university, when my eczema was at its very worst, I had just begun taking the antipsychotic quetiapine, for my bipolar.

After my exams, I patiently titrated onto lithium. Both of these drugs have notably reduced my stress levels and my eczema still flares up. I continue to use the medications and the medicated creams as and when I need to and now, when I’m stressed, I’ll also go walking and swimming and running. Yoga is especially effective: I spend hours in uttanasana (forward fold) and balasana (child’s pose), both coolants for the sympathetic nervous system.

If I can’t work out whether I’m stressed or not (not an uncommon phenomenon for those with bipolar, especially during a mixed state), I’ll just give my body a scan. I know my warning signs now, the smaller, subtler blotches and I know where to find them. I know to check just above my left armpit for a red square patch. I know to check my right nipple for sore shallow cracks.