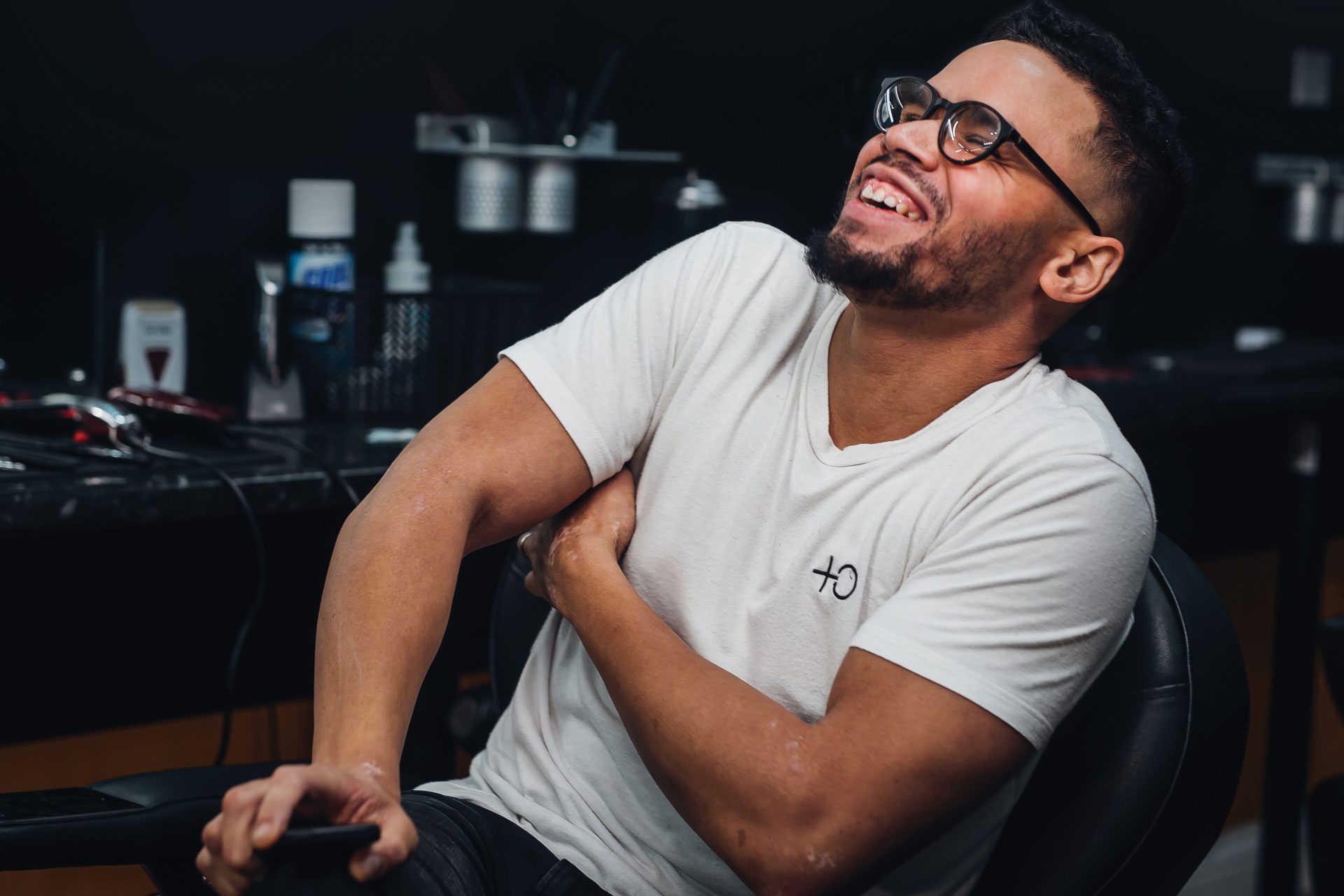 Phil Shand (32) suffered from extreme eczema as a child, until a course of phototherapy changed his life.

While I had eczema from an early age, and was under the care of Dr Edwards at Birmingham Children’s Hospital, from three onwards my skin went into remission. On turning six, though, it reappeared with a new-found intensity and I was referred to Professor Celia Moss, a consultant dermatologist at the same hospital, who did everything she could for me.

I vividly recall being admitted that summer to the hospital for a fortnight. My skin was in a terrible state – constantly red, irritated and weeping – and the doctors and nurses worked hard to get it back under control.

We were due to fly to America shortly afterwards, for a family holiday, and my parents were intent on cancelling but, in the end, I got the all-clear from the doctor to go. No sooner had we landed in New York, though, than I fell ill and was rushed to hospital, where I was quickly diagnosed with an infection. I was so ill that my skin was falling off me and my eczema spiralled to a whole new level.

Summers were always really hard for me. While everyone else would look forward to the warmer weather and playing outdoors, the change in temperature, pollen and grass would all make me extremely uncomfortable – as did exposing my skin in summer clothes for everyone to see. The really sad thing was that I loved sport, and was one of the quickest in my class, but I could never enjoy it in the same way as the other kids. I’d stand itching on the start line, the whistle would go, I’d win the race and then would immediately start itching again once I’d crossed the finish!

Even now, thinking back to things like the June of Euro ’96, I can still remember exactly how I felt at that time. It’s not just my mind that’s stored those memories, either – I can feel the physical distress in my body, even now.

In the end, my eczema became so bad that I missed nearly two whole years of school and had to be taught at home. My tutor would come to the house and would end up holding me in his arms and hugging me while I sobbed. My skin was all that mattered to me and I just wanted the eczema to go away. I couldn’t concentrate on anything else.

By this point my skin was constantly oozing and bleeding and my bandages would pull strips of it off whenever we removed them. My sheets were covered in a cocktail of fluids leaking from my body and my creams, and my mum was forever having to change them – not least, to get rid of the horrible smell. I would wake up completely unable to move and every day my dad would have to pick me up, carry me to the bathroom and lay me down in the tub, for a soothing soak, until I could stretch my arms and legs again.

When your eczema is that severe, little things mean so much. Mum and Dad rubbing my head at night was one of the most comforting things for me. They’d sit there for hours doing it, regardless of whatever else they needed, or wanted, to do.

Throughout everything, my parents were amazing: the epitome of unconditional love. I’m the second-youngest of five children – my baby sister was only a toddler when my skin was at its worst and my older brother was also battling the condition, although not to the same degree – so they really had their hands full.

I now have two young children myself (the youngest of whom has mild baby eczema) and I know how hard it is to manage their routine, so I can only imagine how difficult life was for my parents and I can’t thank them enough.

We all took comfort in our Christian faith during that time and it played a huge role in my believing in, and holding on for, a breakthrough. Hope is so precious when you have eczema, as it’s easy to feel deflated every time a new treatment fails or stops working.

In the end I was referred to Dr David Atherton at Great Ormond Street Hospital, who admitted me to isolation as he’d never seen eczema like mine before. It was David who introduced me, at the end of a long battle of trying different treatments, to the one that would give me back my life – PUVA, a form of phototherapy where a sensitiser (a chemical that increases the effect of UVA on the skin) called psoralen is combined with UVA radiation.

Three times a week, Dad would drive me down to London from Birmingham, until my condition improved and I could continue my treatment nearby at Selly Oak Hospital. Each session felt so relaxing, and so good, and I just knew that something was changing within me. My skin began to clear, and my natural skin tone started to return. The results were simply astounding and, since the age of 13 onwards, my skin has been great.

That doesn’t mean that I no longer have eczema. I still get it on my hands, sometimes on the backs of my legs and, very occasionally, on my face and I still use emollient – Dermol 500 and Diprobase – but it’s nothing compared to what it once was.

I currently work in pastoral care in a secondary school and I know I’m in a privileged position to be able to really help those pupils with eczema, because of my own experience. We have a child in school now and I can see the lines of his bandages under his shirt, I watch him itching and I can remember how I felt in that situation. I also know that when you have eczema you don’t really want people to acknowledge it – I get frustrated even now when someone says to me ‘Your skin has flared up!’ – as if I hadn’t realised! – so I’m always conscious of picking the right moment to say something. I have, however, told him that I know how he’s feeling, that I’ve been there and that I’m here if he wants to talk.

Like many people with eczema, I’ve really benefited from finding my passion in life and I’ve been into rap for as long as I can remember – it’s an incredible art form. When my cousin moved over from New York, he brought his hip-hop influence with him and my love for it just grew. However, it was my friend who is a DJ who helped me to write my first lyrics. Rap is an expression of what you’ve been through and the life you’ve lived, and I’ve alluded to my condition and experience in some of my work.

Crucially, people in the industry are very open minded and accepting of different backgrounds and different issues. If your lyrics are ‘hard’ (really good) then people won’t see your skin, won’t notice the redness and the cracks and they’ll just think that you’re a ‘sick’ (cool) rapper.

You can watch Phil speak about his experience of eczema below in a video made for National Eczema Week.