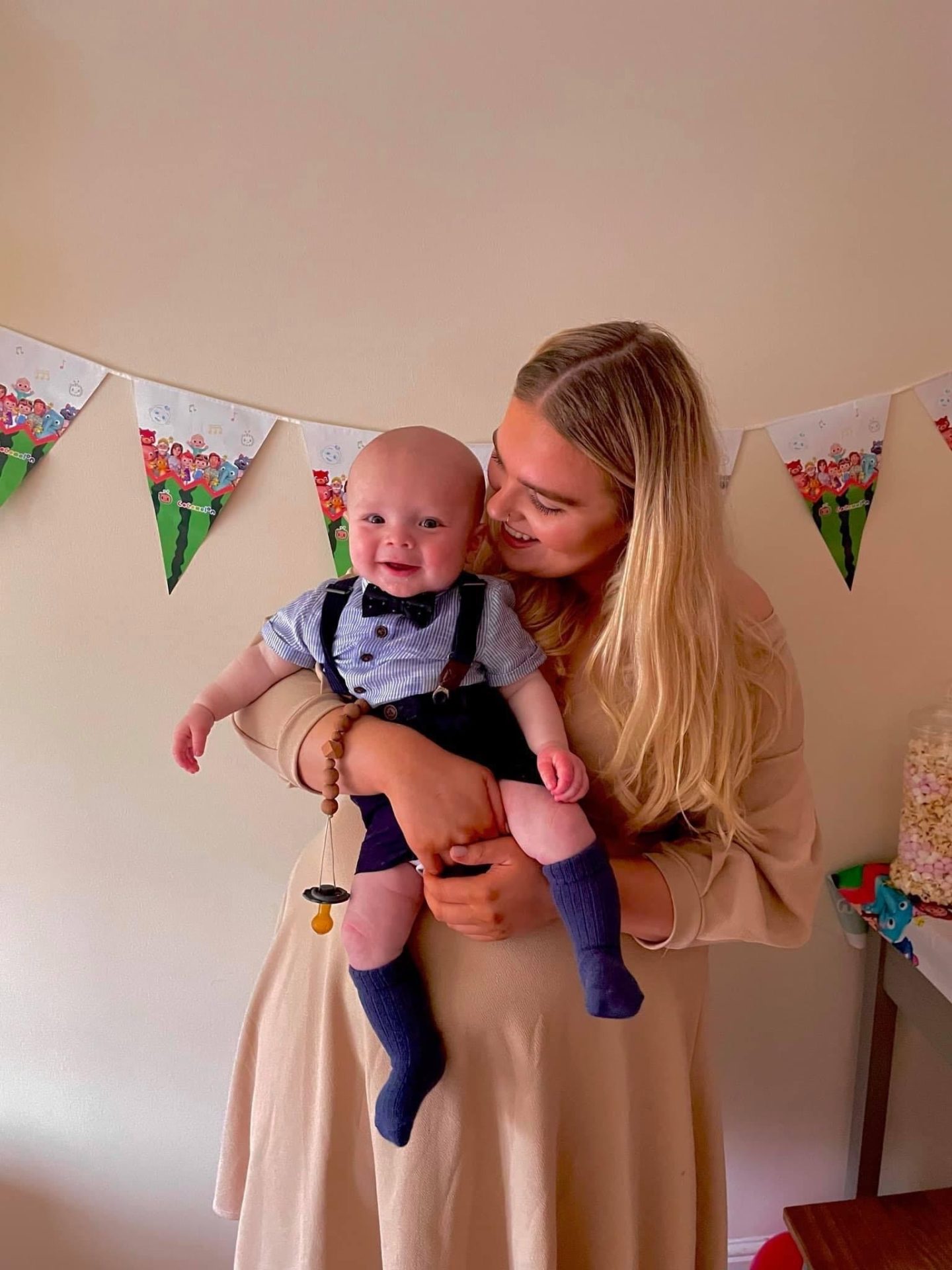 The day Henry was born was the most magical day of our lives. He was perfect. For nine long months we planned and prepared for him. We went to every parenting class available, from learning how to bath a baby and change a nappy, to breastfeeding, to sleep safety – the list goes on. There was nothing we hadn’t practiced, nothing we didn’t know in terms of practical parenting. I’d geared myself up on all things postpartum and what to expect. Those first few months were going to be challenging and nerve wracking but also exciting and magical but it was nothing we hadn’t prepared for.

But then it hit us. Eczema. We most certainly weren’t prepared for that. Something that 1 in 5 babies can experience yet not one single piece of advice offered about eczema, what to look out for in your baby or what you can do if you suspect your baby might be suffering with it amongst all the antenatal classes we attended.

I don’t think we’ll ever be able to forget how many hours we’ve spent trying to treat Henry’s eczema. Slathering him in creams and ointments and steroids to the point that he’s so greasy we can’t hold him, applying messy paste wraps and trying to hold him still so we could bandage him up, holding his hands and legs whilst he screams in his cot and pram trying to itch and scratch against everything he can possibly find, having to constantly apply mitts every time we undress him so that he can’t claw his skin off, holding his hands whilst he’s feeding so that he doesn’t scratch his scalp until it’s bleeding, rubbing his legs and applying ice packs at night trying to take away the itch from a screaming, uncomfortable baby with none of us getting more than a few hours’ sleep at a time before Henry was up screaming in pain again.

His pram and bouncer and cot all covered in his blood where he’s itched and scratched so much to the point that he’s broken the skin and it’s become infected despite all our efforts to stop it. Made even more difficult by the fact that Henry can’t speak and can’t tell us where it’s itching most or what we can do to help. Some days we’ll try 101 things to help and still feel completely helpless as he screams in pain, wriggling everywhere trying to stop his itching. Constantly smelling everyone who wanted to hold him or cuddle him for any perfumes or too strong a washing powder or fabric softener out of fear it would irritate him and spending every second he was out of our arms making sure he hadn’t managed to get to an area of skin to itch.

Henry’s first Summer was extremely depressing. Whilst everyone else was outside enjoying the sunshine with their new babies, we were sat inside in front of a fan with a screaming Henry who could wear nothing more than a babygro at the advice of professionals until his infections had cleared up and his steroids use had reduced. He didn’t get to wear any of the summer clothes we had bought him. We hardly did any of the summer activities we had planned. The days and nights were extremely long.

It took a huge toll on my emotional well-being. I felt as if I’d failed my baby and that all of this was leading to him missing developmental and play opportunities and that he would become significantly delayed. Of course as well as all of this, I was still trying to find my feet postpartum whilst exclusively expressing Henry’s breast milk every two hours. Being a new mum is hard work without throwing eczema and treatments into the mix. I can’t tell you how many nights I cried my eyes out for Henry thinking about how much pain and discomfort he must be in and how many nights I cried out in frustration that we were doing our absolute best for Henry yet still didn’t seem to be getting anywhere. Through the countless hours of trying to comfort Henry, I kept wondering “am I the only mama experiencing these awful episodes with their baby?! Is anybody else going through this insanity!?” I made progress treating one area of his eczema and then it appeared somewhere else and the cycle continued. I barely had chance to catch my breath day to day. I became so paranoid about Henry being in places that might irritate his skin more that before I knew it we were spending days at a time stuck inside the house which also wasn’t helpful.  It was a truly confusing, overwhelming  and lonely time.

Flash forward to seven months of living with baby eczema and we’re finally coming to terms with the fact that Henry will always have eczema, at least for the foreseeable future, it’s just about making sure we keep on top of treatments and manage it before it becomes a significant problem for him. Of course, Henry still has significant flare ups and I’m constantly mindful of allergies now that he’s being weaned (eczema babies have a higher chance of allergies) but he has the most amazing eczema nurse and we are fully supported in making sure he has up to date treatment plans and maintenance treatment. We’re also finding our own little ways of coping with it all.  We went out and bought Henry a selection of new toys that he specifically gets to play with whilst we’re applying his creams, bandages and steroids and they seem to help distract him from reaching straight for his skin to scratch when any of it’s exposed. If he seems particularly itchy, we’ve found that putting him in his baby carrier or pram and getting him out for some fresh air takes his mind off it too. Baby massage has also proven useful. I’ve managed to find support groups of other mums whose babies experience eczema and it’s so nice to know that others are in the exact same position as me. And sometimes, it’s so nice to have another mum to talk to in the middle of the night because they’re up trying to stop their baby from itching too!

Nobody wants to see their baby in discomfort or pain. The first few days and months with your newborn should be filled with cuddles and kisses and looking out for those all exciting baby milestones, not constantly looking out for infected skin and flare ups and stopping your baby from scratching. It takes so much learning, time and support to adapt to life with baby eczema.

It truly is a small statement but something that I really needed to hear when Henry was first diagnosed – caring for eczema babies can feel like a lonely journey but you are not alone and there is support out there.