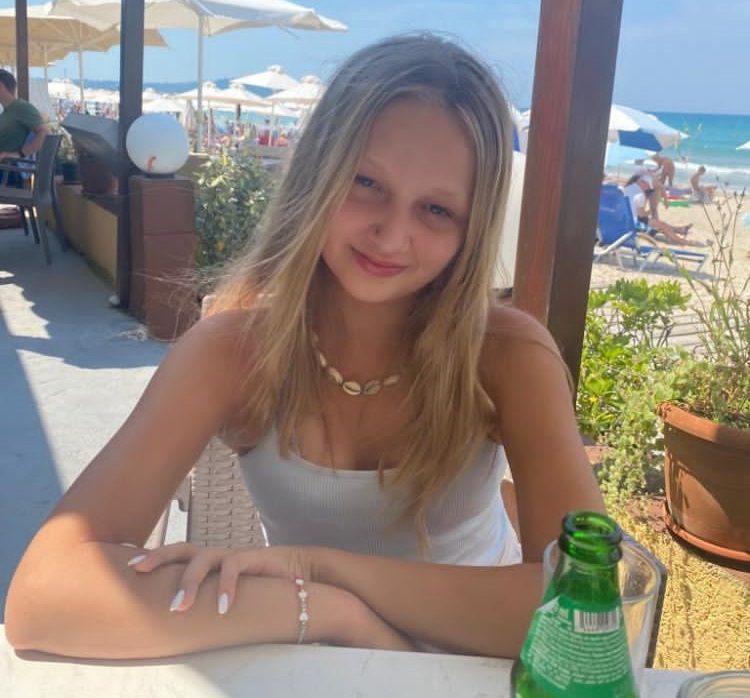 Eliza Wioland is 15-years-old and has suffered from eczema since she was a baby. Here she shares her experiences of living with eczema and what happened when she stopped using topical steroids to manage her condition.

The views expressed by Eliza do not necessarily reflect prevailing medical understanding or the position of National Eczema Society. In 2021, the British Association of Dermatologists and National Eczema Society issued a joint statement on topical steroid withdrawal, aiming to set out what is known about TSW from medical research and clinical practice. The Society has also produced responses to some Frequently Asked Questions (FAQs) about topical steroid treatment and withdrawal here.

National Eczema Society wants to acknowledge and thank Eliza for her courage in sharing her story. Her family too. This shows just how tough living with eczema can be, physically and emotionally, and the hard decisions people face in managing their condition. Like Eliza, National Eczema Society wants to see more research into topical steroid withdrawal to help both patients and the healthcare professionals who care for them.

My experience of eczema began when I was just six months old. For several years it appeared in the usual places, such as my arm, joints, backs of knees and around my mouth and wrists.

I was prescribed topical steroids to treat my eczema for longer than I can remember. It began with milder steroids such as hydrocortisone and then, when they didn’t work as well, I was prescribed a stronger steroid and so on. Up the steroid ladder I went.

However, when I was thirteen years old, I noticed a difference in my eczema and it became more severe. I felt that topical steroids weren’t working anymore and my skin was getting increasingly worse every day – yet without the steroids it would immediately flare, worse than ever. The gap in between topical steroid treatments therefore began to disappear. The eczema was really bad on my face and naturally I didn’t want to go to school.

I was advised by a nurse to wean myself off steroid creams before beginning phototherapy treatment, and that is when my experience of topical steroid withdrawal (TSW) began – literally immediately.

My symptoms
The first stage of TSW that I experienced was a major flare. My skin turned deep red, like sunburn but with clear cut-off points such as my palms. Other people with TSW call this ‘red sleeve’.

The second stage was shedding. My skin would become so tight and dry that it really hurt to move, and then it would flake off. After this, I would be seeing slightly improved skin, and then the cycle would start all over again. It was relentless.

Other common symptoms were oozing, a really deep ‘bone’ itch, nerve pain, shaking, insomnia, ‘elephant skin’ and an inability to maintain my body temperature. I also started losing hair. I had no idea what was happening to me and it was incredibly frightening. I started to do my own research and found this condition called TSW that we had never heard of before. My symptoms ticked literally every box.

The hardest part of steroid withdrawal
The hardest part for me was a feeling of isolation. There is not enough research done into TSW, so it is a scary feeling when not even a doctor or dermatologist can really help you. It can be hard at first to tell the difference visually between severe eczema and TSW and there is not enough information available. The established protocol (for severe eczema) suggests that you try an even stronger steroid or immunosuppressant drug. I declined these options because I had begun to suspect that steroid withdrawal had caused the worsening of my skin and these new, strange, debilitating side-effects. The last thing I wanted to do at that point was to take something else that might cause more side-effects and could possibly cause even more withdrawal problems.

I haven’t been at school for six months, which has affected my social life massively and has given me a huge disadvantage before taking my GCSE exams next year. But for some weeks I could barely even move, let alone even begin to think about any school work whatsoever.

What helped?
At first, I would moisturise my skin with emollients (my dermatologist gave me many to try, as my skin now appeared to be completely intolerant of my previous emollient). However, every morning and every night, whatever I tried would make my skin go even more red and would cause a terrible burning sensation. It felt like absolute torture to have to wake up and repeat this process every day. One day I decided to stop and was surprised at how much better it made me feel. The first couple of days my skin felt almost unbearably dry and flaky, but nothing was as bad as the endless burning and stinging.

After that my skin started to repair itself much more quickly than it had done previously. Then I saw online that thousands of other people suffering from TSW had decided on this approach as well. However, moisturisers do help to ease the pain of tight, dry skin for many sufferers, so my advice would always be to do anything that feels helpful to you and your body. Whatever gets you through.

Another thing that helped massively was finding a couple of people my age experiencing TSW who were very easy to talk to and made me feel less alone. Getting plenty of rest to make up for the sleepless nights, and being kind to myself as much as possible also really helped, as did music.

My dermatologist referred me to the dermatology service at Guy’s and St. Thomas’s Hospital in London, where I saw a professor who let me talk through everything I had experienced and looked at all the photos of my skin. He recognised topical steroid withdrawal and this was incredibly validating for me. I no longer had to keep trying to convince people that what was happening to me was not ‘just’ severe eczema, which is bad enough in itself. And I could officially give a name to all the awful symptoms I had been experiencing. I also found support and advice online, via teenagers on Instagram and TikTok going through the same thing, which was helpful and comforting.

My Hopes for the Future
My skin has improved dramatically and the natural oils are starting to come back. Unfortunately, the last places to heal (which is often the way) are my face and my hands. But I am on the right track and getting there – some days are easier than others, as I try to process everything that has happened to me. TSW is no doubt easier to prevent than it is to cure and so I urge the medical profession to put more funding and research into topical steroids. If that happens, in the future patients will be able to make more informed and better choices about their treatment.